Leeds United have defended the decision to parade the Championship trophy on an open-top bus in front their supporters outside Elland Road.

The newly-promoted club advised fans to stay away from the 4-0 win over Charlton, after which Marcelo Bielsa’s side were presented with the Championship trophy. Some supporters congregated outside Elland Road regardless and were able to watch the Leeds players and staff lift the trophy for them from an open-top bus. 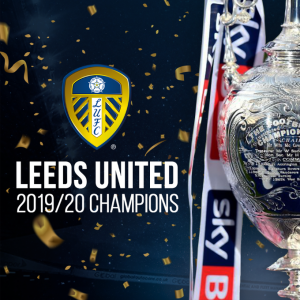 “We were very clear along with the club, West Yorkshire Police and partners that people should not gather at Elland Road or indeed at any other venue in Leeds to celebrate promotion to the Premier League or the presentation of the Championship trophy. Following a meeting of the Leeds United Safety Advisory Group earlier this week, contingency plans were considered and prepared for the likely event that large numbers of fans did not adhere to the Covid-19 safety messaging and gathered outside Elland Road last night, and how to ensure they dispersed in the safest and quickest way possible. This included closing Lowfields Road to traffic and also an agreed approach to have the open-top bus at the ground but hidden from view and not promoted, only to be used if significant numbers of fans gathered as a method of bringing the gathering to an end effectively.

“As several thousand fans were outside the ground, the decision was taken to deploy the bus plan which proved effective as most of the fans left the area within 40 minutes of the team celebrations concluding. All parties involved recognise the difficulties around this decision, which was made only as a method of ensuring the fans dispersed if significant numbers gathered, and would wish to thank all those fans who adhered to the requests to stay safe and stay away.”

Play areas and playgrounds in Leeds to begin reopening