It is with great sadness, Leeds United has learned of the passing of club legend Peter Lorimer at the age of 74 following a long-term illness.

Peter made a huge 705 appearances for the Whites over two spells and is the club’s record goal-scorer, having netted 238 times in all competitions. After catching the eye at junior level in his hometown of Dundee, Leeds beat off a number of clubs to secure his services in May 1962. He made his Leeds United debut on Saturday 29th September 1962 against Southampton at Elland Road at the age of 15 years, 289 days, making him still, the youngest ever player to have played for the first team. 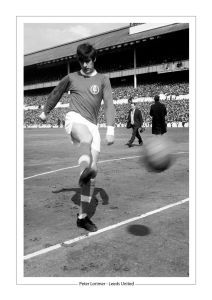 Peter would go on to become an all-time great at Elland Road, winning every major domestic honour, starting with the League Cup in 1968, the First Division in 1969 and 1974, the Charity Shield in 1969 and the FA Cup in 1972. With the ability to put fear into the opposing goalkeeper with his fierce striking of the ball, Peter famously earned the nicknames ‘Hotshot’ and ‘Lasher’ from supporters.

As well as helping Leeds to domestic success, he also played key roles in helping Leeds win the Inter-Cities Fairs Cup in both 1968 and 1971, whilst lined up for Leeds in both the 1973 European Cup Winners’ Cup final and the 1975 European Cup final, in the latter which he controversially saw a goal ruled out.

Peter went on to make his international debut for Scotland on Wednesday 5th November 1969, going on to earn 21 caps, scoring four goals for his country. He departed Leeds United as a legend in 1979, having netted 219 goals and had spells abroad with Toronto Blizzard and Vancouver Whitecaps, along with York City, before returning to Elland Road in 1983.

During his second spell, he hit a further 19 goals in 87 appearances, taking his tally to 238 before moving to Whitby Town in 1985. Following his retirement from playing, Peter became an ambassador for Leeds United and continued to attend matches up and down the country. He was a contributor with his own page in the club’s matchday programme, continuing until last month’s match with Aston Villa, where he became unwell enough to do so.

“I am deeply saddened to hear the news that Peter Lorimer has passed away.

“As part of Don Revie’s great Leeds United side of the 1960s and 1970s, he helped put our city on the sporting map and brought pleasure to many thousands of fans.

“Everyone knows the stories about the power of his shooting – when you watch the old videos back now, it’s a surprise some of those 90mph cannonballs didn’t break the net.

“Peter remained a steadfast supporter of Leeds both city and club – after his retirement and it was with pride that the council was able to award the freedom of Leeds to him and the rest of the Revie boys in 2019.

“His passing comes all too soon after the losses of Norman Hunter, Jack Charlton and Trevor Cherry, three other much-loved players of the Revie era.

“Our thoughts on this sad day for the city are with Peter’s family, friends, former team-mates and everybody connected with Leeds United.”

Peter’s contribution to Leeds United will never be forgotten and his passing leaves another huge hole in the Leeds United family. He will always remain a club icon and his legacy at Elland Road will live on. Our thoughts are naturally with Peter’s wife Sue and the rest of his family at this difficult time.