This year the St Peter’s Singers present JS Bach’s deeply moving setting of Christ’s Passion according to St John. By turns dramatic and heart-rending, this masterpiece brilliantly brings to life the church’s re-telling of its core story – the fury of the mob, the anguish of Peter, the calculations of Pilate, the impassiveness of Christ, and the sorrow of the Christian witness. 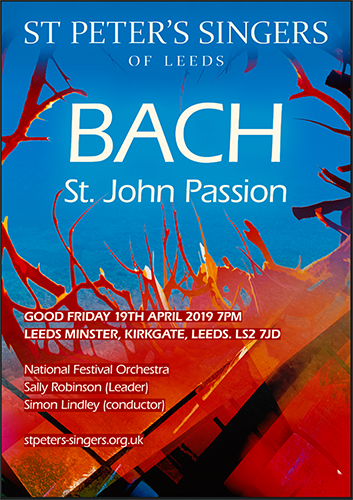 Bach’s wonderful music encompasses a huge gamut of human emotions as well as bringing searing intensity to the drama. The performance will be sung in English, and offers an unrivalled opportunity to hear the work live in the type of setting for which it was composed.

Ella Taylor grew up in Sheffield and has recently graduated from the Royal Academy of Music, where they gained Distinction in MA Performance. A former Chorister of the Year, has a particular interest in performing and premiering new music, and already has a varied list of operatic roles, ranging from Handel, Mozart and Beethoven to Britten.

Stephen Liley, a tenor, studied at the Royal College of Music and Neil Mackie where he won a string of prizes. He has performed Oratorio throughout Great Britain and on the Continent, and has sung at the Queen Elizabeth Hall, St Martin-in-the-Fields and the Aldeburgh Festival, and has sung the St John Passion as far afield as Perth, in Western Australia!

Thomas Hunt, bass, is well-known in Leeds as a former chorister of Leeds Parish Church under his father, the late Dr Donald Hunt, who was then Director of Music. Following time as a chorister at St John’s College, Cambridge and then vocal studies at the Royal College of Music, Tom enjoys an active concert career and is associated with many leading professional choirs in London and the provinces. It is a huge pleasure for us to welcome him back to sing the role of Christus.

Our own Lucy Appleyard and Quentin Brown make up the team, with the National Festival Orchestra, Alan Horsey, David Houlder and St Peter’s Singers completing the cast under the baton of Dr Simon Lindley.

Dr Lindley’s own involvement with the St John Passion extends way back into the late 60s, when, as a student at London’s Royal College of Music, he had the great privilege of serving for a period of some four years as accompanist to Denys Darlow’s Tilford Bach Festival Choir.

Simon says: “Half a century of pretty well continuous involvement with this wonderful work, first heard in St Nicholas’s Church Leipzig on Good Friday of 1724, has taught me a vast amount about its inherently dramatic approach and, not least, provided information about a revised version of the original dating from as early as 1725 – not until the 1740s does the work appear in the form in which we have it today.

It was the German tradition to present the work within the context of divine worship (in this case the Lutheran rite of Vespers); a sermon was preached between the two parts of the Passion, the Lord’s Prayer said by all after the moment when the death of Jesus was declaimed within the narrative and the rite would have ended with a traditional blessing from the Book of Numbers in the Old Testament, beginning with the much loved stanza “The Lord bless you and keep you” – this would have followed directly on from the heartfelt finale chorale “Ah! Lord, when my last end is come, bid angels bear my spirit home to Abram’s bosom going.”

Members of the audience will be encouraged to take part in the congregational chorale hymns. Admission includes a free programme and refreshments. The music commences at 7.00 pm prompt in Leeds Minster and concludes at around 9.45 pm.

Gear up to welcome the world’s best cyclists

Glide into the new decade as Ice Cube turns 20

Light Night’s love-themed artwork will be all heart

Time travellers turn back the clock at Temple Newsam

Live music lives on at Leeds Town Hall during the 2020…