A World Cup winner and one-club man for Leeds United, Jack Charlton was the archetypal English centre-half; strong in the tackle, indomitable in the air and a leader in the heart of defence.

With 773 appearances to his name, legendary defender Jack Charlton has the distinction of being Leeds United’s all-time top appearance holder, a record that is likely to never be matched. A one club player, Jack enjoyed a 23 year spell with the Whites, winning First and Second Division titles, the FA Cup, League Cup, Charity Shield, Fairs Cup and World Cup.

Jack was born into a footballing family in Ashington, Northumberland. While younger brother Bobby was picked up by Manchester United at the age of fifteen, Jack toyed with the idea of a steadier career outside of the game, briefly following his father into the coal mines and applying to join the police force. 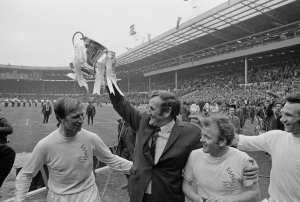 He ultimately opted to join Leeds United’s youth team, and signed professional terms at the age of seventeen. He would soon emerge as a bright young candidate to take John Charles’ place in the heart of defence after the Welshman was moved up to centre-forward.

Two years of National Service and concerns regarding his lifestyle hindered Charlton’s early career, and when Don Revie took charge in 1961, he attempted to deploy Jack as a centre-forward, with mixed success. Though Charlton was allowed to leave the club, prospective moves to Liverpool and Manchester United did not materialise, and the defender ultimately signed a new deal at Elland Road.

Charlton would go on to become one of the key figures in the Whites’ resurgence. Back at centre-half alongside new signing Norman Hunter, the 26-year-old was the most senior figure in Revie’s new-look defence. He assumed organisational duties thereafter, and was a key proponent of the zonal marking system adopted by Leeds during that period. He was also one of the first to stand alongside the opposition goalkeeper on set pieces; a trait which is now commonplace in the modern game.

With a rock-solid Charlton anchoring the defence, Leeds United went from a relegation-threatened Division Two outfit to top-flight title challengers. The formidable, physical partnership of Charlton and Hunter would persist throughout the sixties and into the seventies, playing a significant role in United’s golden era.

He spent all his playing career from 1952 to 1973 with Leeds United, appearing in 629 League games. He won a League Championship, a Second Division Championship, the FA and League Cups, two Fairs Cups and umpteen runners-up medals. He was Footballer of the Year in 1967.

Jack Charlton was part of the England team that won the 1966 World Cup and managed the Republic of Ireland national team from 1986 to 1996 achieving two World Cup and one European Championship appearances. He spent his entire club career with Leeds United from 1950 to 1973, helping the club to the Second Division title (1963–64), First Division title (1968–69), FA Cup (1972), League Cup (1968), Charity Shield (1969), Inter-Cities Fairs Cup (1968 and 1971), as well as one other promotion from the Second Division (1955–56) and five second-place finishes in the First Division, two FA Cup final defeats and one Inter-Cities Fairs Cup final defeat. His 629 league and 762 total competitive appearances are club records.

Called up to the England team days before his 30th birthday, Charlton went on to score six goals in 35 international games and to appear in two World Cups and one European Championship. He played in the World Cup final victory over West Germany in 1966, and also helped England to finish third in Euro 1968 and to win four British Home Championship tournaments. He was named FWA Footballer of the Year in 1967.

After retiring as a player he worked as a manager, and led Middlesbrough to the Second Division title in 1973–74, winning the Manager of the Year award in his first season as a manager. He kept Boro as a stable top-flight club before he resigned in April 1977. He took charge of Sheffield Wednesday in October 1977, and led the club to promotion out of the Third Division in 1979–80. He left the Owls in May 1983, and went on to serve Middlesbrough as caretaker-manager at the end of the 1983–84 season. He worked as Newcastle United manager for the 1984–85 season. He took charge of the Republic of Ireland national team in February 1986, and led them to their first World Cup in 1990, where they reached the quarter-finals. He also led the nation to successful qualification to Euro 1988 and the 1994 World Cup. He resigned in January 1996 and went into retirement. He was married to Pat Kemp and they had three children.

“I am deeply saddened to hear the news that Jack has passed away. He was a legend in English football and it is an absolute privilege that he spent his entire 21-year playing career at Leeds United. As well as being an amazing player, Jack was a true gentleman off the pitch. We will never forget him or his impact on the sport. Our thoughts are with his family, friends, former teammates and everyone connected with Leeds United at this incredibly sad time.”

Our deepest sympathies are with Jack’s family, friends and former clubs. Rest in peace Jack Charlton. We will never forget him.