The Lord Mayor of Leeds, Councillor Eileen Taylor, will lead the tributes to service men and women who have lost their lives in times of conflict on Remembrance Sunday.

Held on Sunday 10 November, people of the city are once again warmly invited to gather at the war memorial on Victoria Gardens to join the Lord Mayor and other dignitaries as they lay their respective wreaths. At 10:50am as is tradition, a procession will leave Leeds Civic Hall and head to Victoria Gardens where a number of wreaths will be laid, including one by the Lord Mayor on behalf of the people of Leeds. 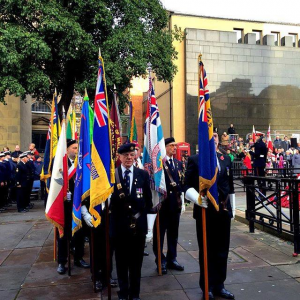 This will follow ex-service men and women plus members of ex-service organisations and current serving military organisations gathering near to the City Museum on Rossington Street at 10.30am before marching to the war memorial. Amongst those joining the Lord Mayor in the parade will be the Lord-Lieutenant of West Yorkshire, Mr Ed Anderson, the leader of Leeds City Council, Councillor Judith Blake and the Leeds Children’s Mayor, Wania Ahmad.

Led by the Reverend Canon Sam Corley the Rector of Leeds, the multi-faith service will be shown on two big screens around the war memorial to allow members of the public who are not near the front to watch the proceedings.

At 11am there will be a two minute silence which will be preceded by a bugler who will sound the Last Post.

After the service, the Lord Mayor and civic representatives will proceed to the steps of the Town Hall where a salute and march past will take place. Members of all communities across Leeds are warmly invited to join the Lord Mayor on Victoria Gardens to mark Remembrance Sunday.

“Remembrance Sunday is a time when the city comes together to honour the heroic efforts, achievements and sacrifices made by so many of our armed forces during times of conflict.

“It fills me with great pride to be laying a wreath on behalf of the city as part of Remembrance Sunday and I invite members of the public to join me on the day in what is always a tremendously poignant and moving occasion for all those that are present.”

The council has also been working with Leeds Kirkgate Market on a Remembrance Sunday Art Project. Poppies from across 20 Leeds schools and groups are currently being displayed across the market to commemorate and remember. As well as the poppy display, the Royal British Legion used the event space to launch the appeal for 2019 and an official poppy pop-up shop in the Market Kitchen area raised over £1800 on the first day.

Council supports employees to breastfeed or express milk at work

Leeds chosen as home of new national infrastructure bank in…