Held at Leeds Civic Hall, employees and volunteers of Citizens Advice Leeds gathered to celebrate all the hard work and achievements of the last 80 years.

Attendees enjoyed afternoon tea and there were a number of speakers at the event including the Lord Mayor of Leeds, Councillor Eileen Taylor, and Leader of the Council, Councillor Judith Blake, who both offered special thanks to the charity for their contribution to our city over the past 80 years.

Citizens Advice Leeds, originally named Leeds Citizens Advice Bureau, are a local charity which provide free, confidential and independent advice to local people. Forming in 1939, it is estimated that the charity has given advice to over 1 million people since then. The event was shared with Chapeltown Citizens Advice, which first opened in 1975, and together both organisations help over 40,000 people a year.

The charities help individuals, families and communities by empowering people to exercise their legal and human rights. They run advice sessions in over 40 locations across the city including GP surgeries and health centres, children’s centres, community centres and many more local venues. Help can also be accessed online and by telephone.

The 80th-anniversary celebration was held in Volunteers’ Week to mark the contribution of the 130 volunteers who currently work with Citizens Advice Leeds and Chapeltown Citizens Advice. Sue Baker, who has volunteered at Citizens Advice Leeds for over 40 years, spoke about the importance to her of being part of such a dedicated team of volunteers and paid staff, working together to help people who are often in difficult circumstances. 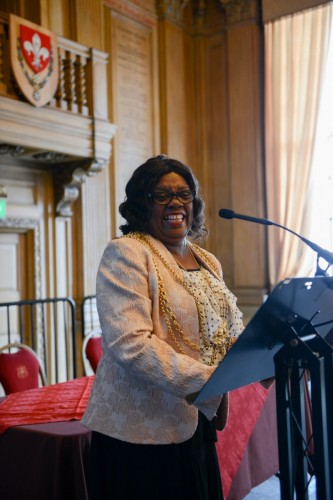 “It was a pleasure to attend the 80th birthday celebrations of Citizens Advice Leeds this week. The charity work exceptionally hard to help thousands of people each year and I’d like to thank all of the many volunteers and employees who have worked for the charity since it formed all those years ago.

“Without volunteers, the charity wouldn’t be able to operate in its current form so I would urge anyone who has an interest in helping others to find out more about becoming a Citizens Advice volunteer.”

“It was an honour to attend the anniversary celebrations of Citizens Advice Leeds on Tuesday. The charity has achieved so much over the past 80 years and have helped over 1 million people in our city which is incredible.

“I’d like to offer my thanks to all the fantastic volunteers who have helped and advised the people of Leeds over the years, without them the charity wouldn’t be where it is today so they should be extremely proud of themselves and their contribution to our city.”

“It is remarkable to reflect that Citizens Advice Leeds has been helping local people since 1939. We estimate that over 1 million people have received advice from us since then, and more than 3,000 people have volunteered their time to delivering the service.

“Being a Citizens Advice volunteer is a demanding occupation and I’d like to thank all the many volunteers over the years for their exceptional hard work and dedication to the charity. I’d also like to express my gratitude to the Lord Mayor and Councillor Blake for taking part in our event today and representing Leeds City Council’s continuing support for our work.”

For more information about Citizens Advice Leeds, visit their website at www.citizensadvice.org.uk or call 0113 223 4400.

More than 200,000 trees have been planted in Leeds over the past year

Love is the greatest refreshment in life. We wish you a happy St. Valentine’s Day

We wish you a happy Easter, filled with happiness, peace and…

Restart grants on offer to businesses in Leeds as lockdown…