To celebrate 70 years of marriage, discover 70 facts about The Queen and The Duke of Edinburgh’s wedding.

1. Princess Elizabeth and Prince Philip first met in 1934 at the wedding of Princess Marina of Greece and Denmark to Prince George, Duke of Kent. 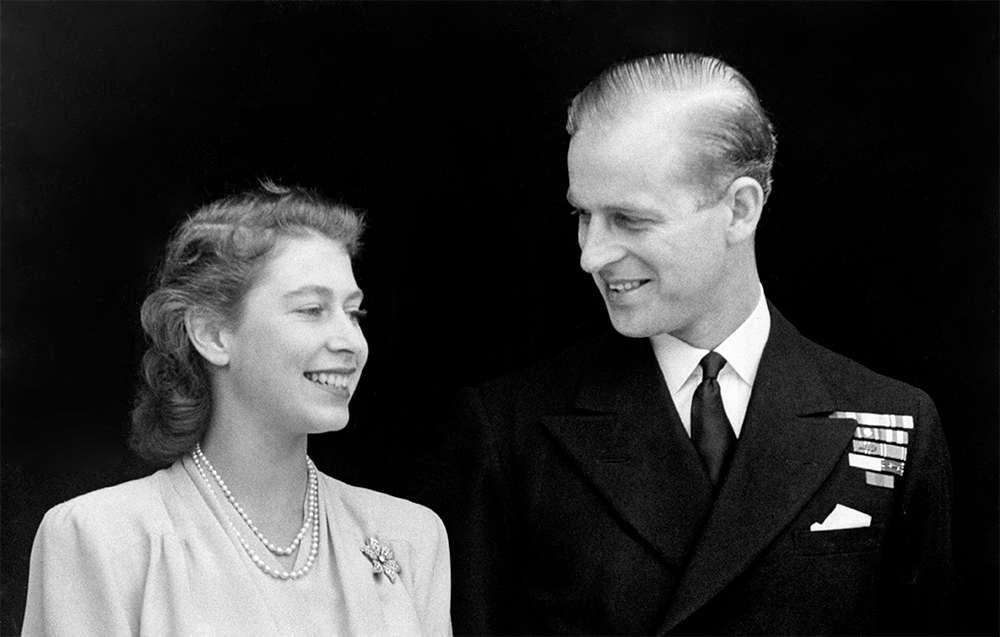 2. Their engagement was officially announced on 9 July 1947.

4. On April 26 1923, The Queen’s parents King George VI and Queen Elizabeth (then the Duke and Duchess of York) were also married at the Abbey.

5. The Queen (then Princess Elizabeth) was the 10th member of The Royal Family to be married at Westminster Abbey.

6. The first Royal wedding to take place in the Abbey was on 11 November 1100, when King Henry I married Princess Matilda of Scotland.

7. Before the wedding, Prince Philip was created The Duke of Edinburgh, Earl of Merioneth and Baron Greenwich of Greenwich in the County of London.

8. Together with her father, George VI, Princess Elizabeth arrived at the Abbey in the Irish State Coach.

10. Prince William of Gloucester and Prince Michael of Kent served as page boys.

11. The Duke of Edinburgh’s best man was David Mountbatten, the Marquess of Milford Haven.

13. A number of foreign Royals attended the wedding, including; The King of Iraq, Princess Juliana and Prince Bernhard of the Netherlands and The Hereditary Grand Duke of Luxembourg and Princess Elisabeth of Luxembourg.

15. The ceremony was recorded and broadcast by BBC Radio to 200 million people around the world.

16. The organist and Master of the Choristers at the Abbey, Australian William Neil McKie, was the director music for the wedding.

17. McKie composed a motet (a vocal musical composition) for the occasion: “We wait for thy loving kindness, O God.”

18. Psalm 67 (“God be merciful unto us and bless us”) was sung into a setting by Sir Edward Cuthbert Bairstow, an English organist and composer.

19. The wedding anthem was “Blessed be the God and Father of Our Lord Jesus Christ” by Samuel Sebastian Wesley.

20. The hymns were “Praise, my soul, the king of heaven”, and “The Lord’s my Shepherd”, to the Scottish tune “Crimond” attributed to Jessie Seymour Irvine, which was largely unknown in the Church of England at the time.

21. The service started with a specially composted fanfare by Arnold Bax and finished with Felix Mendelssohn’s “Wedding March”.

22. There were 91 singers; the abbey choir was joined by the choirs of the Chapel Royal and St George’s Chapel in Windsor.

23. The wedding ring was made from a nugget of Welsh gold which came from the Clogau St David’s mine, near Dolgellau.

24. The platinum and diamond engagement ring was made by the jewellers, Philip Antrobus, using diamonds from a tiara belonging to Philip’s mother, Princess Alice of Battenberg.

25. Princess Elizabeth’s wedding dress was designed by the Sir Norman Hartnell, who submitted designs for the dress. The winning design was approved mid-August, which was less than three months before the wedding.

26. Hartnell cited Botticelli‘s famous painting Primavera, which symbolises the coming of spring, as his inspiration for the design.

27. The dress has a simple cut with fitted bodice, heart-shaped neckline with a low v-pointed waist and a floor-length panelled skirt.

28. Due to rationing measures in place following World War Two, Princess Elizabeth had to use clothing ration coupons to pay for her dress.

29. Hundreds of people from across the UK sent The Princess their coupons to help with the dress, although they had to be returned as it would be illegal to use them.

30. The dress has a 15-foot silk tulle full court train, which was attached at the shoulders, is embroidered in pearl, crystal and transparent applique tulle embroidery.

31. The satin for the applique was produced at Lullingstone Castle in Kent and woven by Warner & Sons.

32. The dress was made from duchesse satin, ordered from the firm of Wintherthur, near Dunfermline in Scotland.

33. The dress was decorated with crystals and 10,000 seed pearls, imported from the United States of America.

35.  Jewellery for the day included two pearl necklaces, the shorter of the two necklaces was the ‘Queen Anne‘ necklace, said to have belonged to Anne, the last Stuart Queen.

36. The second pearl necklace is known as the ‘Queen Caroline‘, and is said to have belonged to the wife of King George II.

37. Both necklaces were left to the Crown by Queen Victoria and were given to Elizabeth as a wedding present by her father, King George VI.

38. The diamond fringe tiara was lent to The Queen on her wedding day, the frame of the gem broke as the bridge was putting it on and it had to be quickly repaired.

39. Norman Hartnell also designed Princess Elizabeth’s going-away outfit which was a dress and coat in mist-blue.

40. After the wedding, the dress was exhibited at St James’s Palace and was then went on tour across the UK, visiting Glasgow, Liverpool, Bristol, Preston, Leicester, Nottingham, Manchester, Bradford, Leeds and Huddersfield.

41. The bridal bouquet consisted of white orchids and also included a sprig of myrtle, a tradition that was started by Queen Victoria.

42. The tradition started when Queen Victoria was given some myrtle by Prince Albert’s grandmother, which she planted at Osborne House on the Isle of Wight.

43. The day after the wedding the bouquet was sent back to Westminster Abbey, where it was laid on the Tomb of the Unknown Warrior – another Royal tradition.

44. The Worshipful Company of Gardeners supplied the flowers for the bouquet, and it was arranged by the florist MH Longman.

45. After the service a wedding breakfast was held (at lunchtime) in the Ball-Supper Room at Buckingham Palace.

47. The wedding favours were individual posies of myrtle and white Balmoral heather.

48. The string band of the Grenadier Guards played music during the breakfast.

49. Famously, the newlyweds went onto balcony at Buckingham Palace to wave to the huge crowds on the mall.

50. The couple received over 2,500 wedding presents from around the world and around 10,000 telegrams of congratulations.

51. Mahatma Gandhi sent a present. It was a piece of cotton lace that he spun himself, and is embroidered with the words “Jai Hind” (Victory for India).

52. They also received many practical gifts; Queen Mary gave a bookcase and Princess Margaret gave a picnic case. Other gifts included a Singer sewing machine and a fridge!

53. The gifts were put on display at St James’s Palace where members of the public could come and see them.

54. Although the Royal couple received eleven wedding cakes, there was one official one which was baked by McVitie and Price.

55. The cake used ingredients from all around the world, including sugar from the Girl Guides in Australia, which gave the cake the name ‘The 10,000 Mile Cake’.

56. The cake was nine feet high in four tiers.

57. It was decorated with the arms of both families, including the monograms of the bride and groom, sugar-iced figures of their favourite activities, and regimental and naval badges.

58. The cake was cut using the Duke’s Mountbatten sword, which was a wedding present from The King.

60. They travelled by train to Hampshire, departing from Waterloo Station. Princess Elizabeth’s Corgi, Susan, came with them.

61. The rest of their honeymoon was spent at Birkhall on the Balmoral Estate.

62. The Queen and The Duke of Edinburgh celebrated their sixth wedding anniversary in the year of the coronation, with a dance at Clarence House given by Queen Elizabeth, the Queen Mother.

63. In 1972, The Queen and The Duke celebrated their silver wedding anniversary with a Service at Westminster Abbey.

64. Later that day, The Queen and The Duke, along with The Prince of Wales and The Princess Royal, attended a celebratory lunch at the Guildhall, hosted by the Lord Mayor and the Corporation of London.

65. In the evening, the Prince of Wales and The Princess Royal hosted a celebration party at Buckingham Palace

66. The Queen and The Duke celebrated their Golden Wedding anniversary in 1997, with a lunch at banqueting House in London.

67. Her Majesty gave a speech at the occasion:

‘What a remarkable fifty years they have been: for the world, for the Commonwealth and for Britain.’

68. An identical copy of the wedding bouquet was made and presented to The Queen on her Golden Wedding in 1997.

69. In 2007, The Queen became the first British Monarch to have celebrated a Diamond Wedding anniversary.

70. United Biscuits, who now owns McVities, made two cakes to mark the diamond wedding anniversary in 2007.

Could you be there for a child in care?

Council releases guidance ahead of hospitality venues reopening in Leeds