Rhinos light up Leeds as thousands flock to festive spectacular

The Leeds Rhinos pushed the big red button to officially get Christmas in Leeds underway during a show-stopping festive spectacular this evening.

The city’s Rugby League heroes took to the stage in front of a crowd of thousands on Victoria Gardens, with the honour of switching on Leeds’s Christmas lights going to departing club legends Danny McGuire and Rob Burrow.

Fresh off October’s superb Super League Grand Final win, members of the playing squad and coaching staff were joined on stage by club mascot Ronnie the Rhino and the dazzling Super League Trophy.

Rob, who enjoyed a glittering 16-year career with the Rhinos said:

“It was huge honour to take to the stage alongside my teammates, switch on the lights and kick off Christmas in style.

“Throughout my career, the people of Leeds have always been incredible and the reception this evening was fantastic and something I’ll never forget.”

Danny, who has won eight Super League championships and two Challenge Cups with the club, added:

“It’s been an incredible evening and an absolute pleasure to come out and see the fans and thank them for the phenomenal support they’ve given myself and the club both this season and through the years.

“We’re all really pleased to be part of getting the festive season underway and it’s been particularly special for myself and Rob to come and see the fans.”

The Rhinos were joined at the event by Leeds Contemporary Singers, who won the BBC’s inaugural Pitch Battle crown in July and who initially met whilst singing in the Contemporary Pop Choir at the Leeds College of Music. 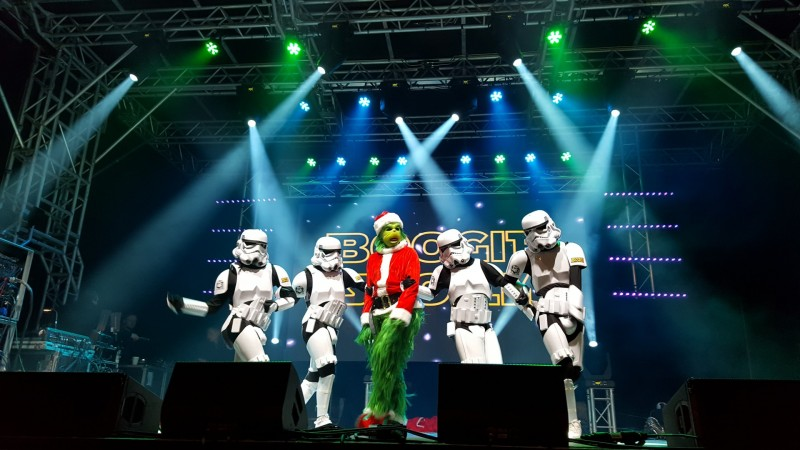 Britain’s Got Talent sensations Boogie Storm also performed a new, and out of this world routine alongside some well-known super-heroes.

Cbeebies presenters Alex Winters and Ben Cadjee put on a fabulous, festive show for the crowds, hosting a singalong along with panto favourite Jez Edwards, who is appearing as Simon Trott in Jack and the Beanstalk at the Carriageworks Theatre.

Danny Colligan, a finalist in Gary Barlow’s musical TV show Let it Shine, who is also starring in the Carriageworks panto this year, also performed for the crowds as well as the incredible Leeds Rock Choir, who performed a selection of well-known contemporary hits along with a Christmas medley with original vocal arrangements.

The show was closed by an impressive display of fireworks, which illuminated the sky over Leeds Town Hall after the lights had been switched on.

“It’s been an absolute pleasure to welcome the Leeds Rhinos to the stage this year and a fitting recognition of their truly remarkable achievements.

“The Rhinos are fabulous ambassador for the city and for sport and the reception they had from the crowd tonight was testament to the special place they have in the hearts of the people of Leeds.

“The crowd tonight was exceptional, as it is each and every year, and it’s always wonderful to get the festive season in Leeds underway in such spectacular style.”

The Leeds Light switch-on marks the official start of the city’s Make it Leeds this Christmas campaign which will feature a number of special events and activities including the annual Christkindelmarkt on Millennium Square which starts tomorrow (Nov 10) from 10.30am.

Object of the week- Demob suit on loan

Good luck message to Leeds Rhinos ahead of Challenge Cup…